The Field Leader Award is a highly-selective honor given to an individual leader working at a Field Foundation grantee organization. It is designed to promote visionaries across Chicago by building social capital, skillsets, networks, and exposure.

Steven is the Senior Program Director, Citywide Youth Councils at Mikva Challenge and was selected as a Surge fellow in September of this year. With over 10 years of experience in the field, a focus on social justice, youth development, and policy – Steven is a strong candidate to receive the award.

“It is an honor to be selected as the Surge Field Leader by the Field Foundation, and I am looking forward to learning with and from other Field Leaders in addition to my Surge Family, shared Steven Rosado, “As a Field Leader, I hope to leverage this opportunity to continue to be an ally to young people in Chicago who are challenging the inequitable institutions that impact their lives every day.”

A native Chicago resident and staff member at Mikva Challenge since July 2014, Steven’s experience includes strengthening youth participation in the formation, implementation, and evaluation of public policy in city government around a variety of issue areas such as education, health and wellness, housing, juvenile justice, and youth safety.

About The Field Foundation

Founded in 1940 by Marshall Field III, the Field Foundation is a private, independent foundation that has been dedicated to the promise of Chicago for over 80 years. The Field Foundation aims its grantmaking toward the goal of Community Empowerment through Justice, Art and Leadership Investment. With racial equity at the center of its giving, it directs dollars to critical organizations working to address systemic issues in Chicago and aims to directly benefit some of our city’s most divested communities

Joanna Vazquez Zelaya is a 2018 Surge Alumna, a graduate of the inaugural Oakland Surge Cohort, the Alchemists. Joanna Vazquez is an advocate for students who find themselves at the intersection of identities and is leading Oakland’s charge in designing Linked Learning high schools across the city in order transform the experience of students within the classroom to engage students in contextualized and relevant learning.

Joanna is committed to fulfilling Oakland’s hope of preparing students for college, career, and community in more intentional and responsive manner that is conscious of the complex interests of young people.  Her passion for social justice, educational equity, and holistic development of young people stems from upbringing in Fullerton, CA as a first generation high school and college graduate.

“I believe every child can learn when they are given the right supports,” Randy says his personal mission. “The reason I’m in this work is because that belief is strong. It’s not going away.” 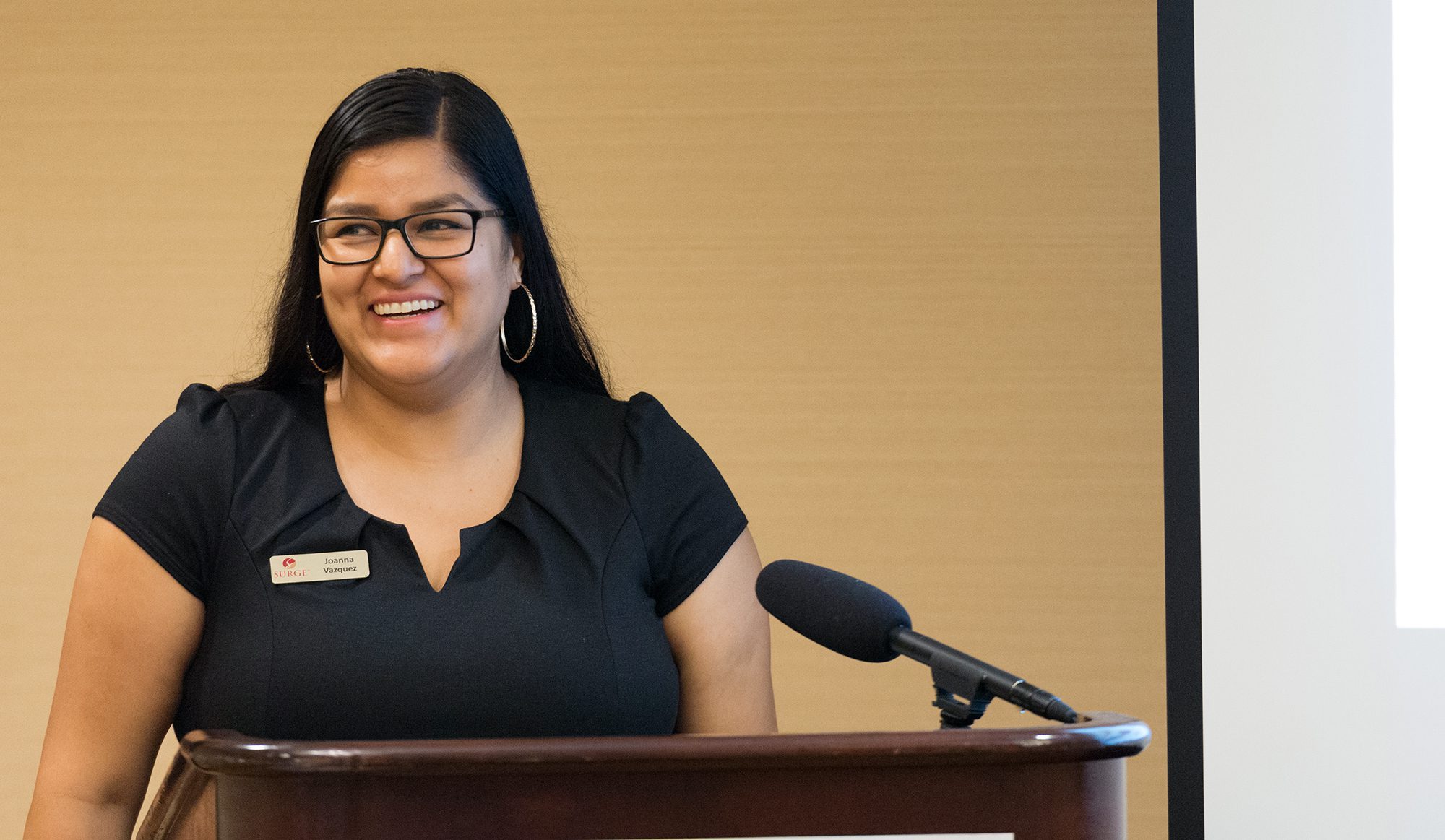 The oldest of four siblings, Joanna took the role of educator, mentor, translator, and connector between the world and her family as she helped them navigate and translate systems and experiences from a very young age. As a first-generation high school graduate and a product of the public education system, Joanna has first-hand knowledge and experience of what it is like to be an underserved student with high aspirations and immense cultural and aspirational wealth and capital. Subsequently, as a first generation college graduate, Joanna has first-hand knowledge and experience of navigating complex systems and structures.

Joanna is committed to fulfilling Oakland’s hope of preparing students for college, career, and community in more intentional and responsive manner that is conscious of the complex interests of young people. She continues to use her strengths to work with school and district leaders to challenge themselves to reimagine and redesign the high school experience of Oakland youth. Joanna continues to hone her skills and abilities to discuss complex educational theories and concepts and translate them to into tangible strategies and process that can be operationalized.

Joanna holds a BA from the University of California, Los Angeles in Psychology and Chicana/o Studies with minors in Education, Gender Studies, and Labor Studies. Joanna currently serves as a mentor through the East Bay College Fund and is a member of the Surge Institute’s Inaugural Oakland Fellowship (2018). Joanna embodies her cultural traditions as a storyteller who shares her journey and experiences within her intersectional identities and is currently working on a podcast to do just that with a larger audience.

Our 2018 #SurgeForMore seven-days of online giving has come to a close, and once again, we saw an inspiring flood of support from our growing community of change agents. Through your generosity, we surpassed our lofty goal of $75,000 in support of programming to develop, elevate and unite emerging education leaders of color, who impact our communities.

With an incredible grand total of $104,137, we blew that goal out of the water and raised more than double our 2017 #SurgeForMore total, all while gaining a multitude of new donors across the nation.

This record-breaking achievement could not have been possible without such generous donations from you, our passionate supporters! We are thrilled to share our appreciation for the loud voices and valiant efforts of our Surge Fellow and Alumni family, who raised more than $15,000 toward the grand total.

We would also like to give special thanks to our generous match donors: two anonymous supporters provided $20,000 and $5,000, respectively, and the Walter & Elise Haas Fund provided $5,000!

Finally, we want to acknowledge an amazing $35,000 donation from an anonymous donor, a deeply heartwarming show of love and passion for our movement and mission!

We are greatly appreciative to all who donated during our #SurgeForMore seven-days of giving, and thank you for your love and support of this work. We could not do it without you. If you haven’t had a chance to give, it’s never too late! In fact, you can join our Impact Community of investors, who have committed to supporting this movement with a monthly reoccurring donation.

Thank you for being a part of this movement, and have a wonderful holiday season! 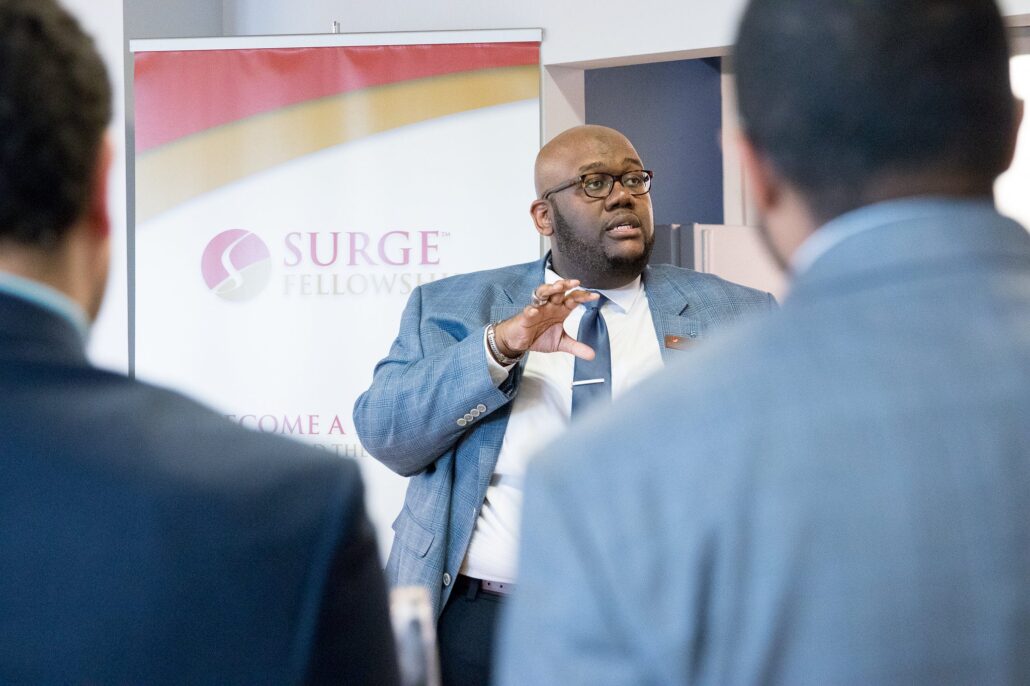 The Surge Institute is proud to announce that 2017 Surge Fellowship Alumnus William J. Collins has joined our leadership team as Vice President of Development and External Affairs.

In this role, William will serve the Surge mission by leading our fundraising and partnership-building strategies, overseeing a team focused on securing the future sustainability and growth of our movement. William will work closely with Founder and President Carmita Semaan, as well as the Surge national team to achieve these needs.

As an alumnus of the Surge Fellowship, William brings a special connection to the Surge mission, which he elaborates on in his statement about his new role:

“I am so excited to join the Surge team because this movement is permanently apart of my heart and soul. The Surge Fellowship experience was so deeply transformational for me as a black man in education, and I see my work now as a staff member being the ultimate way to pay it forward.  I am deeply honored to serve alongside Carmita and the rest of the Surge team as an energetic champion for this life changing and historic work.  I am incredibly energized by our plans to #LeadThe Surge across this country as more leaders of color deserve the chance to develop the skills they need to be seen and heard wherever decisions are made on behalf of the students they serve.  Surge is home for me – I’m so happy to be here.”

We are honored and proud to call William a member of the team.

William previously served as Vice President of External Affairs for OneGoal-Chicago, a college access and persistence organization working towards closing the college divide for young people across the country.

In this role, William’s mission was to ensure OneGoal-Chicago maintained its financial stability by maintaining and growing a diversified and sustainable investor base, building efficiencies of scale to keep the revenue goal manageable and increase awareness and the sense of urgency to close the college degree divide within the Chicago as well as build OneGoal’s reputation as a leader in the college access and success movement and elevate the voices and stories of the OneGoal community.

Beginning his career in corporate America, William’s business acumen, strategic thinking and financial prowess allowed him to climb the ranks at several Fortune 500 companies, including Target and The Home Depot. Despite his corporate success, William constantly sought to fill a void in his life. It was in his decision to become an educator, following in the footsteps of his mother — an educator serving Chicago Public Schools for over three decades — when William knew he had found his calling.

William has always believed that life’s most important and urgent question is, “What are you doing for others?” To that end, William left a lucrative career in the corporate world in 2009 and pursued a career in teaching. For six years, William taught economics and finance at the award-winning Chicago High School for Agricultural Sciences, of which he is an alumnus. While there, he made lifelong connections with his students through education and mentoring. In 2013, William received the Chicago Public Schools’ Exemplary Teacher Award from the Office of College and Career Success, which recognized him for his demonstrated excellence in teaching and learning and for exceptional contributions to the profession.

William holds a Master of Education in curriculum studies and administration from DePaul University and a Bachelor of Science in economics from the University of Minnesota-Twin Cities, to which he received a full academic scholarship. In 2014, he was selected as an Education Pioneers Fellow, where he completed a strategic review of the resource allocation process for the Office of Diverse Learners Supports and Services at the Chicago Public Schools’ Central Office. That same year, he also wrote a full-length essay entitled,“Education, Democracy and Social Discourse: A Contemporary Response to George S. Counts and Boyd H. Bode” in the Schools: Studies in Education journal, published by the University of Chicago.

In 2016, William was named one of Chicago’s Top 35 Under 35 Making an Impact by Chicago Scholars. During this same year, William was welcomed to the third cohort of Fellows for the Surge Institute, an elite leadership accelerator that was designed to identify and groom emerging talent in education and provide them with leadership development as well as access to networks and visibility, empowering them to bring new ideas, perspectives and solutions that change the landscape of education.

William is an authentic and passionate leader who has dedicated his career to moving the needle of college completion for the marginalized and oppressed. As a native of the South Side of Chicago, he saw the value of education as a means to escape adversity. He fundamentally believes that every student deserves the chance to attain a college degree and the life that comes with it. He is also an active member of Alpha Phi Alpha Fraternity Inc. and a committed mentor to many college students. William is a music enthusiast and an avid international traveler. He currently resides in Chicago, IL.