In Surge’s continued mission to elevate the growing network of alumni, we are proud to pull back the curtain on Surge Angels, a Walton Family Foundation-funded pilot program that will allow our more entrepreneurial alumni the opportunity to secure funding, guidance, and support in taking their innovative ventures to the next level.

This initiative connects 10 Surge Alumni as they develop eight ventures that will elevate their voice, influence, and impact in the urban education. Among those ventures are education consultancy firms, youth counseling programs, and teacher development initiatives, all with the ultimate goal of improving education for our communities.

Surge Angels consists of a series of four sessions, in which the group collects to engage with experts in business growth and social impact, such as Maslow Development founder and Surge Faculty member Derwin Sisnett and Megan Kashner, an assistant professor and Director of Social Impact at Northwestern University’s Kellogg School of Management. The program culminates in June with a pitch competition, in which the alumni will seek funding and recognition for their ventures.

Shenita Johnson from the 2017 cohort said about the program, “The launch of this venture under the Surge Angels umbrella is illustrative of how the ecosystem can and will foster improved outcomes for black and brown children.” Surge Angels is one of several initiatives in which Surge seeks to support leaders of color well beyond their time in the fellowship.

The pen is mightier than the sword and all that jazz. Words are the key to victory. Assessment and mutual understanding lead to connection. Dialogue leads to treaties.

Oversimplified, but you get the idea.

In the grand scheme of language, the term “Latinx” is brand new. It is a new iteration of a long and storied history of a group of Americans taking control of the labels placed upon them. “Latino,” “Brown,” and “Latin@” were all evolutions that occurred both within and outside these communities. And each evolution has been hotly debated at every turn.

“Latinx” came into existence in recent years and has specifically gained traction as a powerful act of resistance against gender hierarchies and binary categorization for Latinos and Latinas. There are many places to learn about the origins of the term as well as the positive and the negative responses to it.

This is a good example.

As a national nonprofit aimed at lifting up education leaders of color in service to the underserved children of the United States, we at the Surge Institute strive for progression and forward-thinking in all our work. It’s what our mission is all about. This forces us to be cognizant and thoughtful about the many social justice movements arising in this country alongside our own, particularly as we expand our work to progressive spaces like the Bay Area. We must make ourselves part of every conversation that presents new and more inclusive ways to talk about the communities we seek to serve. 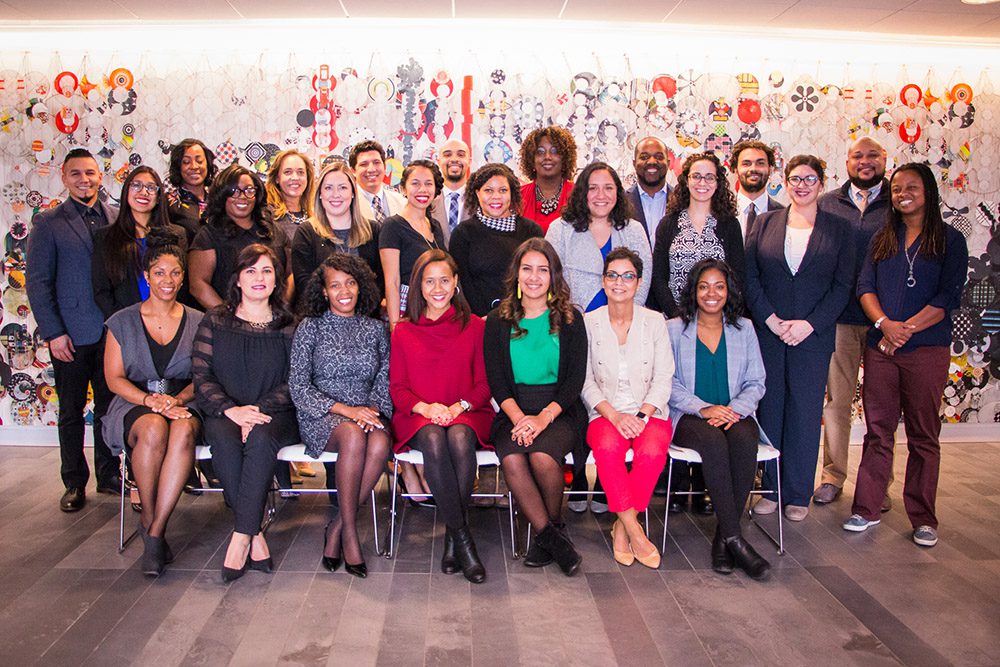 The 2018 Chicago Surge Fellowship is made up of 24 emerging African-American and Latinx education leaders.

When the question of using the term “Latinx” came up, we gathered as an organization. Our entire team—in Chicago and Oakland offices— came together for a deep discussion on whether to officially adopt the term into our language. And that discussion did not end until every voice was heard.

Some team members were enthusiastic about “Latinx,” praising its progressive acknowledgment of the gender spectrum. Others were concerned about its potential trendiness and disregard of years of the ethnic complexity and diversity of identity of the Latino community. Latino and Latina members of our leadership team fell on different sides of the argument, presenting thoughtful and valid arguments for why they did or did not identify with this relatively new term.

We also sought the guidance and opinions of Latino and Latina Surge Alumni, who were honest about their love, hate, and indifference for the term. The process was thorough, but never thorough enough, and it was both enlightening and taxing. There was no consensus—nor could there ever be—but we needed to make a decision.

So we leaned into inclusiveness.

But as organizations, companies, institutions, we must be well-intentioned in how we use language. In disregarding the term “Latinx,” which seeks to include, we disregard a growing population of people with gender non-conforming identities, who are already made to feel like outsiders. As people of color, don’t we feel that way enough? We are framed as the “other” plenty. Let’s not do it to each other.

Our intention is to be inclusive and see the beautiful spectrum of leaders across race, ethnicity, and sexual orientation. We want to create spaces of love, healing, and transformation. We need leaders to show up in all their power, genius, and courage so they can transform education spaces for the communities and children they serve. That is our mission, and our language should reflect that. By adopting this term into our language, Surge is saying we want Latinos, Latinas, and all in between and beyond those parameters to shape the future of education for our youth. All.

Language is messy. So are labels. But vocal clarity in inclusion is just as important as inclusion itself. We have communicated an effort at unity, and hopefully, that message is clear.

We welcome emerging Latinx leaders to this movement.

Paul Morgan is a 2018 Surge Fellow (Chicago). He is also veteran, volunteer, and philanthropy professional focused on providing youth with meaningful experiences, educational access, and equity.

As the Director of Programs and Innovation for the Daniel Murphy Scholarship Fund (DMSF), Paul oversees the core academic enrichment programming. Having been a Murphy Scholar with a mentor, Paul is able to see the true value of that relationship and use those experiences to elevate the mentor program today.

“I seek to be held accountable for my vision and goals,” Paul says of his goals for his Surge journey. “I believe the Surge Fellowship and the network of support, will help focus my vision and set me up for success with its achievement.” 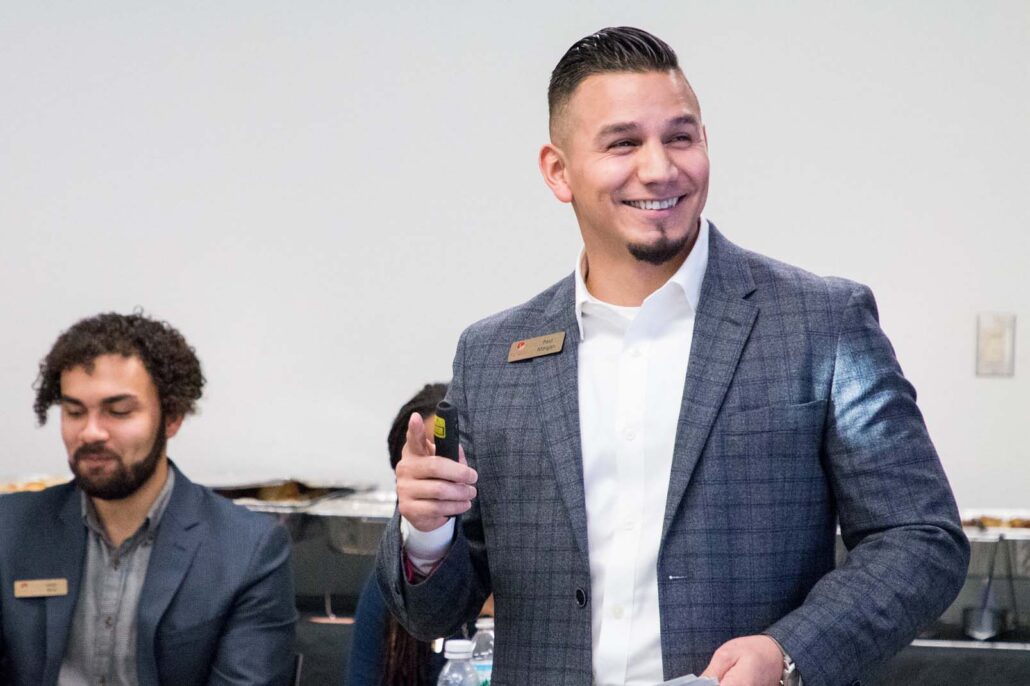 Prior to joining DMSF, Paul worked for the Office of Minority Student Affairs at the University of Illinois at Urbana-Champaign where he counseled low-income, first-generation college students whom, like him, wanted an opportunity to achieve a more ambitious future. He also instructed several undergraduate courses for the University.

Paul later spent four years working as a Graduate level Instructor for The Chicago School of Professional Psychology. He received his Bachelor’s and Master’s degrees from the University of Illinois at Urbana-Champaign while simultaneously serving six years in the United States Marine Corps Reserve to include a combat deployment to Fallujah, Iraq.

In our continued mission to unite and elevate leaders of color, the Surge leadership team came together with more than 40 Surge Fellows and Alumni to learn how to build wealth from financial guru Stuart A. Taylor, II. It was a relaxed and informal evening with Taylor, in which the Surge community asked thoughtful questions about how to build wealth and Taylor provided honest answers and proven strategies for success.

Surge Founder Carmita Semaan took to social media to share her feeling about the evening. “It was honest…it was stimulating…and so necessary,” Semaan said. “Our people need and deserve so much more than ‘professional development.’ At Surge, it’s about pouring everything we have into our community. We are not just investing in leaders professionally…we are investing in the entirety of their being. I often say that we are digging wells from which we’ll never drink…and I mean it with all my heart. We are arming warriors who will change the game for our babies and their communities for generations to come. It’s a blessing and source of great pride to be able to do it.”

Stuart A. Taylor II has led a successful career in investment banking, proven by his execution of more than 50 major transactions in eight different countries. From 1999 to 2001, he served as Senior Managing Director of Bear, Stearns & Co. Inc., and Taylor serves as Chief Executive Officer and Chairman of the Board of Analytic Innovations, LLC. Taylor has been the Chief Executive Officer of The Taylor Group LLC since June 2001.